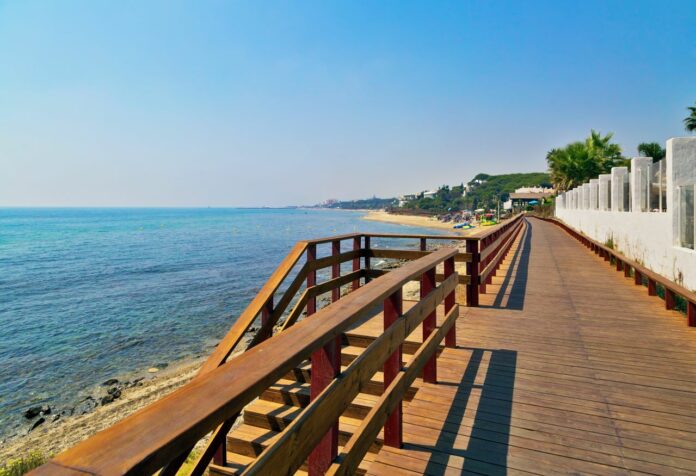 Mijas Costa is a municipality of two main parts. First, you have got the old village, a charming knot of white shining buildings in an epic landscape a few hundred metres above the sea level, but just a short ride down to the beaches of Fuengirola. It was a Moorish town that was huddled around a castle of which a few small fragments and the original street plan remains. Mijas Costa is some way south, on the cost between Marbella and Fuengirola. This area has all hallmarks of a modern Mediterranean getaway, with acres of golf courses, yet more upscale holiday communities and sandy beaches with modern homes.

The oldest part of Mijas is set high away from the coast and on a mountainside where there are whitewashed old houses that stand out brightly against the bare rocks and evergreen trees. It is a rural Andalusian village in every sense, expect for the large community of expats: the streets, following their Moorish plan, are laid with cobblestones, hanging flowerpots which bring vivid colours to the white walls and the upper floors of homes have wrought-iron balconies. There are a number of superb vantage points for photos of the Sierra de Mijas cradling the village: you can clamber up a section of the old walls, or the terracing at the Plaza de Toros where the vistas are sublime.

Some way south of the mountain village, La Cala de Mijas is one of the coastal parts of Mijas. Prior to tourism, it was also a traditional settlement and although it is now a bit more developed, the place still has a charming atmosphere. The beach holds the prestigious Blue Flag for its hygiene and amenities with a long drag of soft sand washed by moderate waves. The boardwalk behind it is new and traces the beachfront for miles, boasting cafes, chiringuitos (typical Spanish beach bars) and family-run shops. On summers nights, there are concerts next to the 16th Century Torre Vieja watchtower and the El Baratillo street market is help in La Cala on Wednesday and Saturday mornings.

Mijas’ Pueblo’s ethnology and history museum has a quaint home in the village’s old town hall. As you enter, you will notice the two plaster sculptures of Hercules on either side of the doorway appearing to hold the building up; this was supposed to symbolise the responsibility of the Mijas’s old municipal representatives. The museum has tons of exhibits that bring centuries-old trades and industries to life, so you will see the methods and tools involved in carpentry, wine-making, basket-weaving, baking, tillage, fishing and oil-pressing in addition to what the interiors of rural homes looked like.

This museum contains the miniature collections of the eccentric stage magician and hypnotist, Juan Elegido Millán, known as Professor Max. He died in 1975 and during his career he travelled the world and picked up hundreds of tiny curiosities, which are now on display. The original museum was actually inside Professor’s Max’s own wagon, however, this was replaced by the current mock version in 1992. One of the strangest ones inside is a real shrunken head which was the work of the Shuar people in Peru and Ecuador. There is also a portrait of Abraham Lincoln on a pinhead and the Seven Wonders of the World painted on a toothpick.

When the doctor Esteban Martín y Martín was disappointed by the absence of monuments in the 15th century, Christopher Columbus, the explorer, decided to do something about it and this fairytale castle was the outcome. It was designed by the doctor himself in the mid 80s and as unbelievable as it may sound, it was constructed by just two local bricklayers over the next seven years. Architecturally, it is a romantic expression of all the styles that Spain is known for. There are overtones of gothic, mudéjar (Moorish-style), romanesque as well as the renaissance. A tongue-in-cheek feature here is the oriental pagoda, as a reminder that Columbus had been searching for a route to Chine when he landed at the New World.

Carved into the rock beside the Mirador de El Compás, this small hermitage dates back to the mid 16th Century. The story goes that the carving of the virgin inside dates to before the Moors arrived and lay hidden for hundreds of years to prevent them finding it. The representation had been completely forgotten about until the 1500s, after Mijas was reconquered by the Crown of Castile. It has been said that a dove led two brothers to the castle tower where they rediscovered the carving. Whether you believe that story or not, the grotto is stunning and worth pausing at for a couple of minutes.

If you are staying in Mijas Pueblo, the closest beach to you will be Los Boliches-Gaviotas. It is around 10 minutes down the slope by car and part of Fuengirola. This one also has achieved the Blue Flag and is full of things people want from a Costa del Sol beach. The sand is spotlessly clean and has rows upon rows of sun loungers next to palm sunshades and you can make your way around via the small boardwalks. The surf is moderate, however, on rare days it may be a bit too choppy for children. The Paseo Marítimo Rey de España to the side is a broad walkway with beach bars every few strides and a long line of apartment blocks across the road.

Fuengirola also has a rather large marina where several of water sports companies have their offices. Thrill-seekers can try some high-speed motorised fun, such as tubing, water skiing, wake-boarding or parasailing high above the water. There is also a jet boat, for a white-knuckle ride hitting speeds of 55 mph and making 360° spins. If your idea of a water-based activity is a bit more serene, you could try a cruise or a dolphin-spotting trip. Yacht charters are also on offer and you can spend half a day or more on a crewed ship going wherever you want.

On the Costa del Sol, zoos with sad-looking animals and cramped cages are a thing of the past. This is the replacement and it is altogether much more ethical. Bioparc Fuengirola has some 200 animal species across four different zones: Indo-Pacific, Equatorial Africa, Southeast Africa and Madagascar, all in large enclosures that synthesise the original habitats as closely as possible. Children will love being able to see pygmy hippos, orangutans, meerkats, gibbons, Sumatran Tigers and gorillas as if they are in the wild. In the summer, the park is open till around 01:00 which is great if you want to see the nocturnal species up and about.