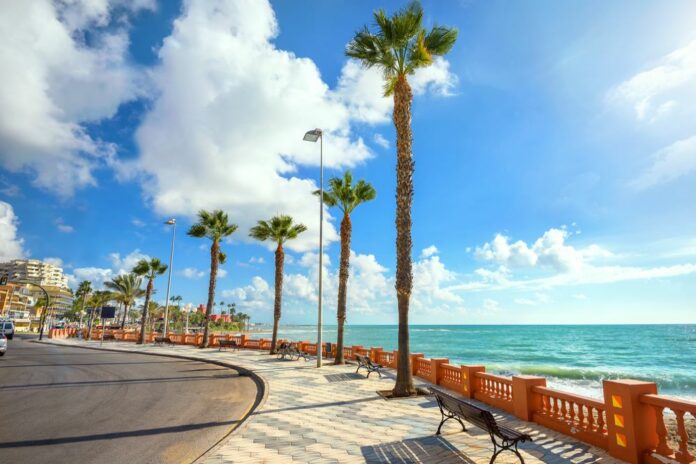 The Costa del Sol can be found in the province of Malaga. It stretches along the coastline for approximately 159 km from Nerja to Manilva. A majority of this coastline is comprised of amazing beaches of all kinds. The capital city is Malaga, with a metropolitan population of around a million. There are cities East of Malaga which include Torre del Mar, Rincon de la Victoria, Algarrobo, Velez-Malaga, Nerja and Torrox. You can find other cities West of Malaga which include Benalmadena, Torremolinos, Fuengirola, Mijas Costa, Estepona, Marbella and San Pedro de Alcantara. The Costa del Sol is Spain’s greatest resort for many reasons.

It has Spain’s best climate. The average temperature during the year is around 18.5 C. There are a minimum of 300 days of sunshine, and explains the title of Costa del Sol, which means Coast of the Sun. Their winters are the mildest in Europe and there is lots of tourism then, when northern Europeans want to leave their snow-clad countries. There is a small amount of rain in winter, and even when it does rain, the skies clear quickly afterward and the sun reappears, shining. Two cities on the Costa del Sol: Torrox Costa and Marbella, have the greatest microclimates in Europe, with surrounding mountains protecting these cities from the cold, northerly winds. The mild winters are enjoyed by those who move here, or those who wish to spend winters here and return to their countries in the spring time. So, summers are cooler and winters are milder than in inland Spain.

The native Malagueños are incredibly friendly people who love the company of all kinds of tourists, whether they are Andalusians, foreigners or Spanish from other regions. They are most likely the friendliest of all Spanish and a custom of hospitality is ingrained. They are used to having all kinds of guests, from the earliest centuries of their history. The Greeks, Phoenicians, Romans, Vandals, Visigoths and Moors visited and stayed. This land was alluring to all tourists, and the Malagueños are a mixture of all these people.

The tourist boom began in the 1970’s and continues to bring tourists to the resorts and beaches of the Costa del Sol. The majority of Malagueños are optimistic and outgoing about their future. They enjoy talking and they like to have fun and party. They like eating nice food and they have a long history of culture associated with their cuisine. They always help visitors, no matter where they have come from. The visitor is truly welcomed with open arms.

Malaga Airport is the third biggest in Spain, after the airports in Barcelona and Madrid. Connections to other European and Spanish cities is simple and there are tons of low-cost airlines that are now flying to Malaga, so the price of the flights are rising. Work is now going on to build an additional runway and a brand-new passenger terminal has just been inaugurated, so the capacity of the airport has essentially doubled. Easy access to Malaga is crucial for tourism, because they lose enthusiasm when they have to make a huge amount of effort to reach the tourist destination.

With approximately 159 kilometres of coastline, one should find amazing beaches in Malaga. The beaches of Fuengirola, Torremolinos, Torre del Mar and Marbella are truly world class. They have tons of facilities including beach showers and bathrooms and they are also very clean. Blue Flag beaches are those that meet quality standards and the Costa del Sol has tons of Blue Flag beaches. The beaches have excellent seafood restaurants that are moderately priced. Fresh fish is served every day, and eating fish is one of their enchantments.

The blue flag is provided to those best quality beaches in Spain. In 2009, 23 beaches in the Costa del Sol received this honour.

Among the major cultural offerings are:

There are some breath-taking gardens in the Costa del Sol.

In the heart of Malaga is Malaga Park. It is adjacent to the port and is a hundred-year-old park that has been remodelled recently. It is known for its 800-metre-long space and semi tropical plants.

Located beside the Town Hall is The Garden of Pedro Luis Alonso. It has a gorgeous rose garden that is composed of 10,200 rose bushes, with around 70 different varieties.

On the outskirts of Malaga is The Botanical Gardens of La Concepcion. This contains huge semi tropical gardens. It is actually the biggest garden of its kind in Europe.

Villa Padierna Hotel is located in Estepona. It is a new Tuscan style hotel with amazing gardens and some of the greatest Roman statuary in Spain.

This hotel located in Marbella has some incredible gardens that border a stream.

This hotel located in Estepona has lush gardens around many cascades and waterfalls.

Malaga has a massive transportation interchange building. It is called Vialia (Maria Zambrano Station). Here, you can take the Cecanias train, the AVE and the bus to other various cities located in Malaga or to other provinces. Vialia is one of the largest of its sort in Spain, making transportation connections simple. Malaga is also building a Metro system that will be connected to Vialia. Malaga’s bus system is simple to use and it goes just about everywhere.

There are so many reasons to adore the Costa del Sol, from the climate to the amazing food, the culture, the beaches and so much more. We hope this article has helped convince you how wonderful the Costa del Sol is. Who knows, this may be your next holiday!